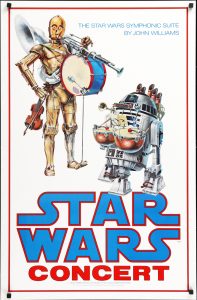 Promoting a series of concerts featuring the Star Wars musical score by John Williams, and conducted by Zubin Mehta.

The concerts began in November of 1977. In the Spring of 1978, the people who ran the concerts sold the idea to other people, and the new owners wanted a single poster image for all of the concerts. This poster was commissioned at that time in 1978 by art director Suzy Rice. However, it was never released to the public and it was not used at the concerts, which makes it one of the most rare Star Wars posters there is.